Differences between current version and previous revision of DeerLodgeLittleJoe.

Another view on the south end of Main Street in Deer Lodge, with a Milwaukee Road EF-4 locomotive on display.

The Milwaukee ran the only transcontinental electric railway in the United States. Some 400 miles of the road, from eastern Montana to Idaho (Harlowton to Avery) were electrified. The EF-4 "Little Joe" was one of the main engines used on these tracks.

The 10 EF-4 (Freight) and 2 EP-4 (Passenger) series engines were called Little Joes as they were originally built by GE for the USSR in 1946. When relations with the USSR went sour, they were sold to the Milwaukee Road. Little Joe is a play on the name of the Soviet leader at the time, Joseph Stalin. The freight units were numbered E-70 to E-79. The passenger units were E-20 & E-21.

The Milwaukee ceased electric operations in 1974. 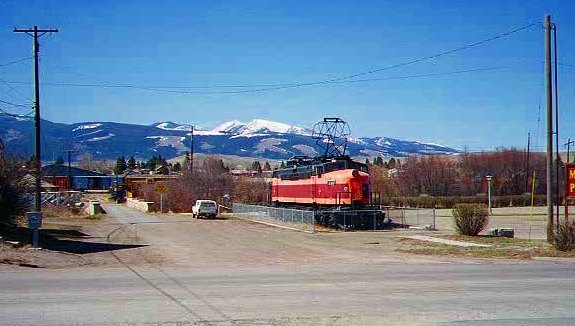 My dad and another fellow ended up getting Milwaukee to donate the engine to the city. However, the city wouldn't pay to have it moved, so the two ot them then spent a summer moving the locomotive themselves. They rigged up rails on pallets and would push the engine (all 2000 tons of it) forward a few feet at a time with a front loader until they came to the end of the rails. They would then move the pallets around to the front and repeat the whole thing.

The two of them moved the engine across town to a park, a distance of perhaps a half mile. One complication was that the truck which hold the wheels of the locomotive can only rotate a few degrees (trains don't take sharp corners). A number of times the train fell off the temporary rails because the curve was too tight. Each time this happened, they would have to spend days jacking the locomotive back up to get it on the tracks. They finally got it moved, though.

The engine sat neglected on the lawn of the city hall for twenty years. Recently, the town got interested in it again and had it professionally moved across town to this new location and repainted, etc. This cost something like $20,000.

There's an interesting story in there, I'm sure.

(thanks to Milwaukee enthusiast Dave Comar for corrections to this page).

forward on the MonTana path, or

forward on the MilwaukeRoad path.