Differences between current version and previous revision of DevopsIsHereWhetherYouLikeItOrNot.

When Dinosaurs Roamed the Earth

I'm a crusty old sysadmin. Heck, I've got the neckbeard to prove it: 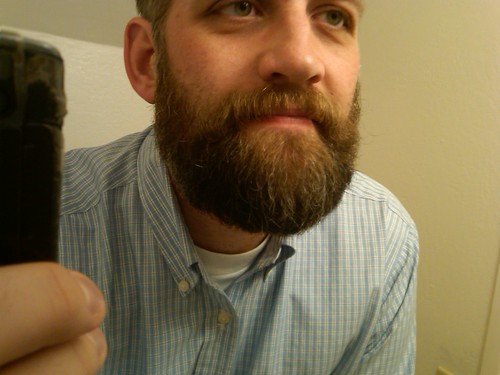 My day job is managing a group that manages the software on 12,000 freebsd servers. I eat, sleep, and breathe system administration. If I wasn't doing this for pay I'd still be doing it for fun.

However, the world of traditional system administration is dying. I know that statement pisses some of you off to no end. Heck, it pisses me off too. I want to spend all my time with my precious servers. I want to get around to finally fixing my ntp configuration once and for all. I want to get ipmi configured on all my machines.

My Side Jobs Are Drying Up

Last week I had lunch with and old friend. I've been doing sysadmin work for the company this guy works at for over 10 years. He originally brought me in to help him manage the linux and windows infrastructure. Back in those days we had 3 linux servers, tape backups, the whole 9 yards. He would call me every few months to help with software upgrades and the like.

Over time we've simplified the configuration. Now there's just one server. The tapes are gone, replaced with usb disks and rsnapshot. Every year I help him less and less with his infrastructure as it's stable and simple.

This brings me to the lunch conversation. My friend wants to virtualize their whole setup. Actually, he doesn't want to do it - the owner of his company is demanding it. This other fellow has heard about 'the cloud' and he just knows he can save lots of money by using it.

Note that this is a bunch of baloney. The current setup is stable, reliable, and costs the company virtually nothing. Doesn't matter. The owner has heard about the cloud and that's the way things are going to go.

This same conversation is happening at every small company in the world right now. What does this mean for us sysadmins? The simple little jobs are going away. Sure, you can continue to work as a windows admin (but hopefully I will not try that again). Other than that, however, there's not going to be a lot of low-end work for you to do.

Like all dinosaurs, we have a choice: adapt or die. If you know about all the virtualization stuff that is going on these days and you still want to crimp your own network cables, I won't stop you. Hey, maybe you can join a netops or siteops team at a big company. All joking aside, there's nothing wrong with wanting to do that sort of work, and I encourage you to pursue it. Just realize you are off on a different path and you should probably stop thinking of yourself as a sysadmin.

So assuming you want to stay on the sysadmin path, what to do? The answer is DevOps. You've got to start automating. You've got to get on the cloud. You've got to make that developer and operations communication start happening. Sure, you could probably take your sysadmin mojo and port it right in to the cloud. Spin up a few standalone virtual servers and manage them by hand all you want. I won't stop you. However, that's not a good long-term solution either. Virtualizing your neckbeard buys you a few years but that's it. It certainly doesn't improve your career skills. If I was hiring a sysadmin right now, I'd ask if he has any vps experience. If the candidate said yes, I'd ask how he managed those vpses. If his answer wasn't puppet or chef or something similar, I'd be pretty suspicious.

Let's for the sake of your career and sanity assume then that you aren't going to treat those virutal servers as precious and unique snowflakes. That means you are going to need configuration management and automation. Hey look, those are a couple of the core devops methodologies. And hey, what about the fact that you're now working with automation? That's DevOps again. Hm, I'm seeing a lot of DevOps in your path.

Get With It Already

My basic point here is that tradtitional system administration work is not a good long term career plan. Now is the time for you to either find a specialized path (like network administration) or start applying new approaches and techniques. There ain't going to be much room for you to keep fiddling around with your adorable little physical servers much longer - unless you want to go get a job at a VPS hosting company.