Two views of the inside of the lighthouse.

This blurs on the edge of this first picture are actually a grating which I had to poke the camera through, as the light area was locked up. This is the whole lens assembly, which rotates via the gear you can see on the bottom. 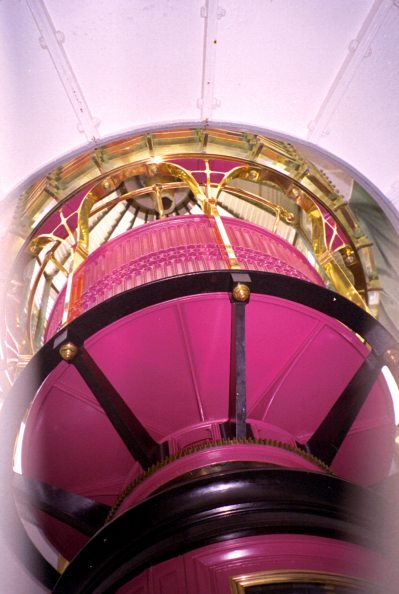 A ranger showed up just when we were leaving and was nice enough to unlock the lighthouse and give us a tour. The next picture is the gearbox right below the light. A weight on a pulley provided the power to spin the lens. The 200 lb. weight would run the lens for 2 hours, then the keeper would have to crank it back to the top. The blur in the middle of the picture is the speed governor, which consists of a set of fan blades attached to a weight. The angle of the fan blades varies with the speed of the lens mechanism. As the shaft gains speed, the blades turn towards vertical to bite more air and slow the shaft down. As the shaft slowed, the blades would then rotate towards the horizontal and reduce the drag on the shaft, allowing it to speed up. This feedback mechanism keep the lens spinning at precisely the right speed to produce a beam every six seconds as mentioned earlier. No electricity was involved when the lighthouse was built in the mid-1800s.

In the early 1920s, an electric motor was added to spin the lens and bypass the clockwork mechanism. The clockwork was left intact as a backup due to the very unreliable electric service to the lighthouse. It was last used when the power failed in 1972, just a few years before the lighthouse was decomissioned. 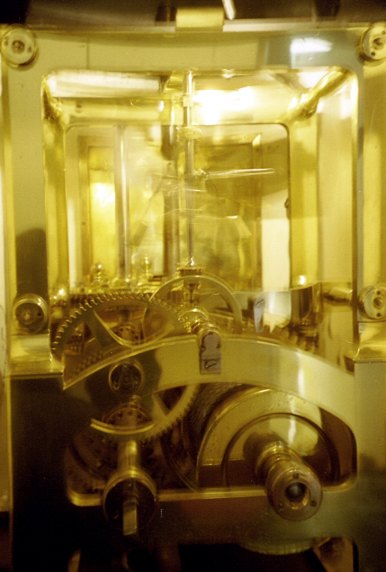