I recently signed up for Suddenlink internet service in a house that previously had only DSL. I was pretty excited to go from 5mbit/s to 400mbit/s - DSL just isn't great for supporting multiple video sessions at once.

Suddenlink is the cable company in this town, and they offer 400mbit/s for a reasonable price of $58/mo. They charge $10/mo to rent a modem, so it makes no financial sense to use their modem. Theoretically any DOCSIS 3.0 or 3.1 modem with at least 16x4 channels should work fine at 400mbit speed. After some investigation, I settled on a Netgear CM600. I have a CM1000 at another location and it's worked fine, so Netgear seemed solid.

When I tried to order the cable modem on Amazon, they were all out of new units. As I was under a time constraint, I ordered a used modem since it was listed as like new condition. I received my modem and thought I was good to go.

Thus began my Suddenlink ordeal. I had the modem in hand when the installer came to hook up the house. He ran the cable, tested the signal strength, and connected my modem. He told me that it would take an hour or so to actually sync up and connect, and he left.

You can guess what happened next - the cable modem did not work. It would cycle the send/receive lights and blink the internet light, but nothing would go solid and I did not have a connection. The next day, I called Suddenlink and sat through an hour of phone tree hell only to be told that there was an outage in my area.

The next day, the cable modem still hadn't synced up. I called Suddenlink again, sat through the phone fun, and did some diagnostics with the support rep. She told me they couldn't see my modem on the line, and an installer would need to come back to the house. No mention of the mysterious outage from the day before.

The installer came the next week and messed with the cables and tested the signal. He said everything looked fine, and refused to connect one of his company-provided modems to see if it would sync up. I was told my modem was defective and that was that. I had some doubts about this after seeing the way the second installer left my wiring: 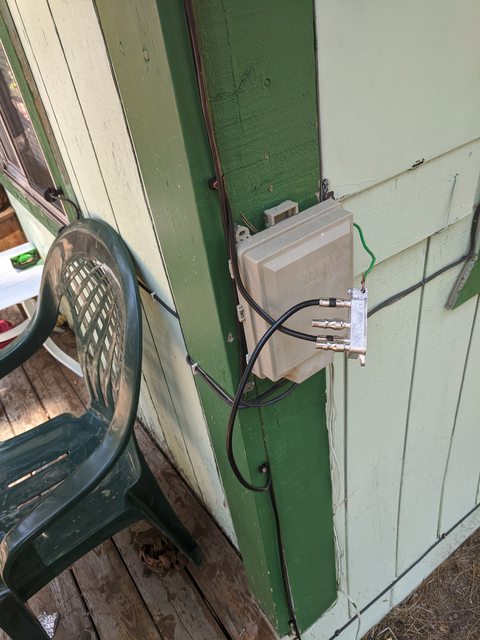 Not having anything to lose, I ordered a different replacement modem, the Arris SB6183. This time I did get a new modem. Before hooking it up, I decided to look at the admin web interface on the original Netgear CM600 modem which wouldn't sync. I came across this interesting message:

which got me thinking maybe something was weird on the cable modem. Some googling of those messages led me to this netgear support issue entitled 'Cable Modem CM600 stuck in IPv6 Mode'. That in turn referenced a dslreports.com message thread explaining that Comcast requires the ability to force cable modems in to ipv6-only for provisioning. Once the modem gets set that way, there's no way for the end user to change it back - even a hard reset of the modem doesn't do it.

Long story short, I connected the Arris SB6183 and everything worked fine. I don't have any official answer on this, but my strong hunch is that Suddenlink only does ipv4 provisioning. I assume my original Netgear CM600 had previously been used on Comcast and thus forced to the ipv6-only provisioning mode. Assuming Suddenlink doesn't support ipv6 provisioning, there was no way for the Netgear modem to ever connect.

Luckily the return window is still open for the Netgear modem, so I'm sending it back. It just caught me by surprise that a used cable modem could end up in a state where it would never work with a certain provider. If anyone has more details on this I would love to hear them.

When I was ordering the second cable modem, I originally considered the Arris SB6190. The 6190 is a 24x8 modem, so it would support close to gigabit ethernet if I wanted to upgrade the service in the future. However, there are apparently a bunch of problems with the Intel chip in the SB6190 so you should steer clear of that cable modem.

I guess the lesson I learned here is not to buy used cable modems. New ones aren't that expensive, and you won't get bitten by weird glitches like this. I hope that someone from Suddenlink reads this page and adds this info to their FAQs - but I'm not holding my breath on that.